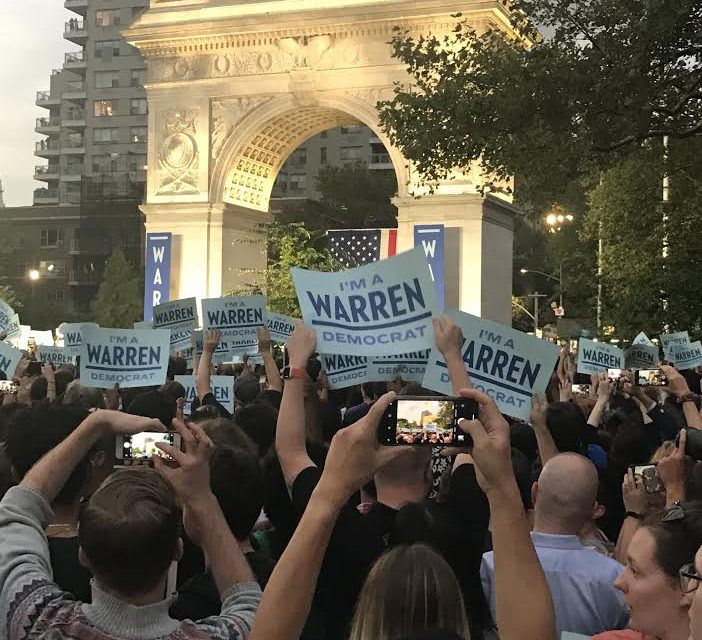 Baby: Frances, for the first woman in the Cabinet.

As I stood in a crowd of 20,000-plus at Washington Square Park in New York City last night, I thought of this scene from Dirty Dancing. Stay with me.

We were there to hear 2020 presidential candidate Elizabeth Warren speak. After she swept in to the strains of Dolly Parton’s 9 to 5 — “There’s a better life, and you dream about it, don’t you? It’s a rich man’s game no matter what they call it, and you spend your life puttin’ money in his wallet …” – Warren began with a geographically, historically, and politically apt anecdote.

She told the story of the Triangle Shirtwaist Factory fire in which 146 workers, mostly women, were killed in 1911. It had happened not far from where she was standing at a time when workers had been fighting for better conditions, but on that day died mostly because they were locked in and couldn’t escape the fast-moving flames. Warren went on to describe them jumping from high floors, their blood running into the gutters.

“The owners worked their political connections,” Warren said of the lead-up to the fire. “They made campaign contributions and talked with friends in the legislature. They greased the state government so thoroughly that nothing changed. Business owners got richer, politicians got more powerful, and working people paid the price. Does any of this sound familiar?”

She then began to lay out the bold vision she has for our country on climate, guns, income inequality, education, student loan debt, health care, racial injustice and more. The tireless Warren methodically and powerfully ticked off her intentions, in spots punctuated by applause. Then:

“I know what some of you are thinking. Too much. Too big. Too hard.”

That line right there is like catnip to a professional coach like me. I was already listening, but now I was so focused everything else melted away. Not even the gorgeously lit arch with the Empire State Building lights peeking through distracted me.

Warren then told the story of Frances Perkins, a 30-year-old workers’ rights activist who was nearby when the factory fire was happening. She saw the women jumping. A week later, a half million people showed up at a funeral march.

That was Perkins’ launching point. She went to Albany, created a commission investigating factory conditions and then became a lead investigator.

“ … [T]his was years before women could even vote … but Frances had a plan,” Warren said, cheers erupting as people connected the line to Warren’s own t-shirt motto.

Perkins led the charge on fire safety, Warren explained, then helped rewrite New York State’s labor laws. Then Franklin D. Roosevelt made her Secretary of Labor, where she tackled “big structural change” as the first woman in the cabinet.

This in turn brought me to Baby Houseman giggling about the origins of her name to her new lover. It was a moment in Dirty Dancing where we really felt the class divide and learned something about the deep political convictions of Baby’s parents.

“Here is what I want you to think about,” Warren said. “What did one woman, one very persistent woman, one woman backed up by millions of people across this country get done? Social Security. Unemployment insurance. Abolition of child labor. Minimum wage. The right to join a union. And even the very existence of the weekend.”

Boom. How does that not rouse even the most dormant among us?

My mind is still open on the 2020 election and I’d welcome the chance to see other candidates speak, but on this night Elizabeth Warren laid out a challenge for us: Think big. Don’t be daunted. Get involved.

With my 57-year-old knees aching from all the standing, Warren still had me. It was intoxicating, an incredibly well-written speech. I thought of the backdrop to that intimate Patrick Swayze-Jennifer Grey scene, words composed by Carole King and Gerry Goffin:

Is this a lasting treasure
Or just a moment’s pleasure?

I suppose we’ll have to wait and see.