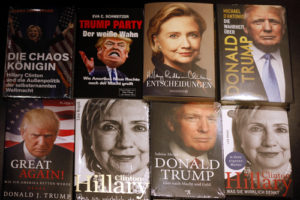 I approach my favorite bench at the Hoboken waterfront, happy to sit down and read for a little while with a cup of coffee at my side. The bench is empty and so I plop down. As I sip my coffee, I hear the guy on the next bench.

“Old woman. Why does it have to be an old woman sitting next to me?”

It takes me a moment to realize he is referring to me. I don’t react, as clearly that would serve him well. So he raises the volume on his voice.

“Old woman. Old woman. Damn old woman. Why couldn’t a young one sit next to me? Fucking old woman.”

Now I have to physically steel myself from visibly reacting. Gorgeous day. People all around. Get out your iPad and read just like you were planning to do.

“Now why couldn’t SHE sit next to me? Hot. Young. We need more of those around here.”

As it happens, I’m simultaneously immersed in reading What Happened, the of-the-moment memoir by Hillary Clinton. Also, as it happens, I am on the part of the book where Clinton talks about the pointed distinction she draws between sexism and misogyny:

When a husband tells his wife, “I can’t quite explain why and I don’t even like admitting this, but I don’t want you to make more money than me, so please don’t take that amazing job offer,” that’s sexism. He could still love her deeply and be a great partner in countless ways. But he holds tight to an idea that even he knows isn’t fair about how successful a woman is allowed to be. Sexism is all the big and little ways that society draws a box around women and says, “You stay in there.” … We can all buy into sexism from time to time, often without even noticing it. … Misogyny is something darker. It’s rage. Disgust. Hatred. It’s what happens when a woman turns down a guy at a bar and he switches from charming to scary. Or when a woman gets a job that a man wanted and instead of shaking her hand and wishing her well, he calls her a bitch and vows to do everything he can to make sure she fails.

At that point the misogynist on the next bench watches a lean man with a bunch of tattoos running by and begins ranting again.

Once I get past the desire to tell this guy to go fuck himself, I start wishing I could find a way to ask him who he voted for. Had he been sitting on benches doing this for years, or had he been emboldened by the election of Donald Trump? Yes, my own conjured up narrative, but this just brings home so clearly what many Trump supporters still don’t understand. To us this isn’t as much about who lost as about who won.

They still don’t get that when Trump won, this dope on a bench won. You know who else won? White supremacists. Just ask them. They’ve been on the record about it. You know who else won? Bad cops. Reference the President’s speech when he told them to rough up people in custody. Har-dee-har-har. Back slap. Who else won? Women who are more comfortable with men in charge won. Wealthy people who put portfolio over conscience won. Shoppers who are threatened when they hear someone speaking another language in Walmart won. Homophobes won. People who want to tell a woman they’ve never met that she has to carry a pregnancy to term won. Fans of putting up walls to solve problems won.

And oh yeah, the misogynists won. There isn’t a glossier prize for them than Donald Trump, is there? A man who bragged about grabbing pussies and went on to become President? They hit the mother lode. And he found a woman, no less, to carry out his agenda of letting more misogynists have their way on college campuses. Because, you know, sexual assault is horrifying on “both sides.”

One of the reasons I walked down to the waterfront with my book was because I was ready for a break from a productive morning that was then followed by an unsettling incident. I was in my first-floor apartment and I had heard a man screaming with rage, “Get in the car. I’m sick of the two of you and don’t want to hear another word from you.” I bolted up out of my chair and headed to the window. He was berating what appeared to be his wife and teen daughter.

“Shut up. Now.” He screamed that again and again. People were staring as they walked by.

I was on the verge of calling the police or asking if there was a problem because clearly they were afraid of him. The daughter shut the car door too loudly for him and he yelled, “You wanna try that again?” Tears were streaming down her face. I could see him still screaming once they were all in the car. At one point the daughter opened the door and he started pulling away knowing her legs were out of the car.

I felt paralyzed. I did nothing. I knew I would be wondering about them all day.

That’s when I decided to take a little break and read. Because all that kept flashing through my head was what kind of men that teen girl would date or what she might do to escape the rage. She is still so clear in my mind.

In the age of Trump, how do we tell her it’s all going to be OK? 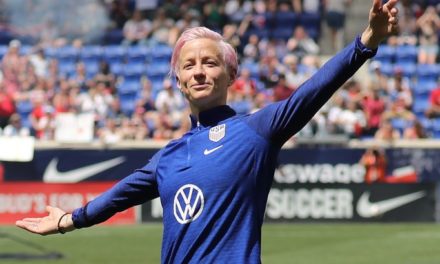