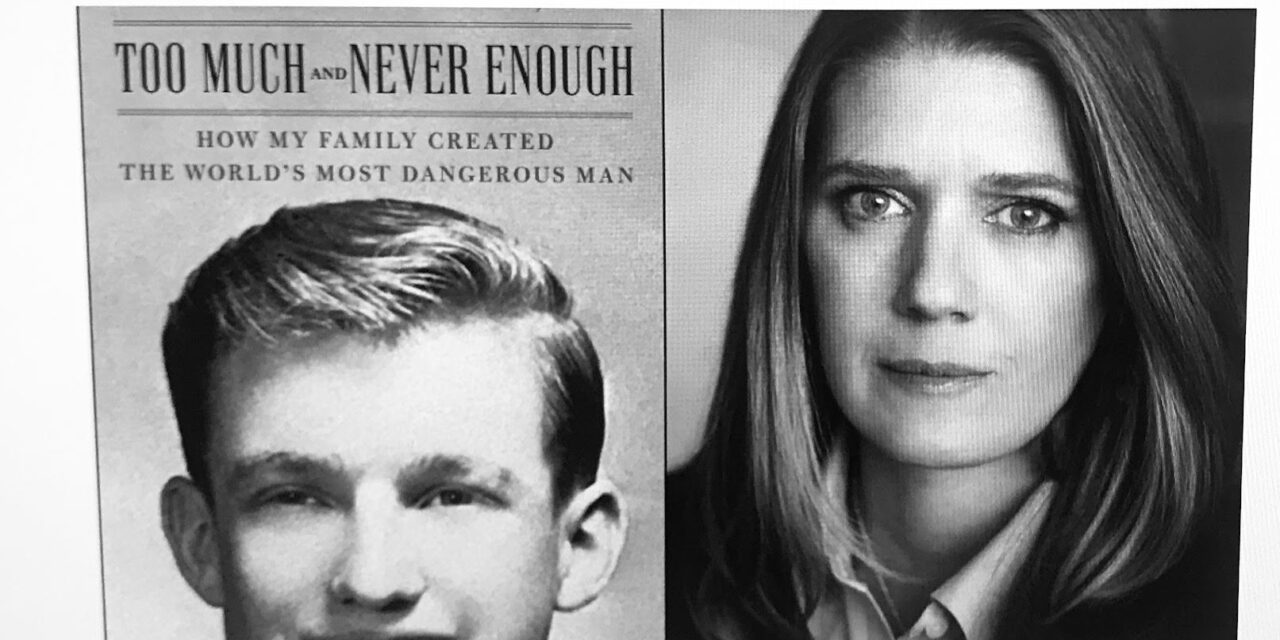 It is natural to wonder right out of the gate if Mary Trump is out to settle a score with her uncle in her book, Too Much and Never Enough: How My Family Created the World’s Most Dangerous Man.

I won’t keep you in suspense. She’s not.

The reader who is really paying attention will find the biggest clue right after the dedication page in this standalone quote:

If the soul is left in darkness, sins will be committed. The guilty one is not he who commits the sin, but the one who causes the darkness. –Victor Hugo, Les Miserables

This is about her grandfather, also known as Donald Trump’s father, Fred.

As if it wasn’t enough for Mary to carry that the sociopath – as she calls her grandfather –played a major part in the death of her father, Freddy Jr., at age 42, she is now witnessing her uncle, the President of the United States, rack up thousands of deaths on his watch in a pandemic that doesn’t seem to be subsiding any time soon.

So while her words and chosen anecdotes about Donald Trump are scathing, everything is laid out in the context of how he was raised and how that childhood created – the word she aptly uses in the subtitle – what he is today.

It’s helpful here to resist the urge to go to that small place, the one that reduces life situations to blame. This book is way too smart and nuanced to be diminished that way. Mary Trump holds a PhD from the Derner Institute of Advanced Psychological Studies and has taught graduate courses in trauma, psychopathology, and developmental psychology. Some members of her family might not value that level of credentialing, but most of the thinking world does.

Mary’s lens on what we are all going through – and I mean global citizens all – is not some kind of trashy, vindictive tell-all. She is scared, just like many of us. One might say, even more so because of the insights she brings here.

“In order to understand what brought Donald — and all of us — to this point, we need to start with my grandfather and his own need for recognition, a need that propelled him to encourage Donald’s reckless hyperbole and unearned confidence that hid Donald’s pathological weaknesses and insecurities,” Mary Trump writes.

As a writer and editor myself, it’s worth pausing to recognize not just her rich storytelling and turn of phrase, but the underlying presence of an editor who had her hew to the psychology narrative, however tempting it might be to stray. Anyone interested in the study of human behavior, particularly early childhood parenting, would find this book fascinating.

One of the more common questions I was asked when I mentioned I was reading Mary Trump’s book was – will it change anything? Delivered with skepticism, concerned questioners wondered if people who support the President will be swayed by what she’s written. My answer? Doubtful. Donald Trump and his loyalists have already discredited Mary and I don’t see them even bothering to read the book.

When Fox News anchor Chris Wallace mentioned the book to the President in a recent interview, Donald Trump was dismissive of how Mary characterized Fred Trump.

“For her to say – I think the word she used was psychopath – what a disgrace,” Trump told Wallace. “She ought to be ashamed of herself. That book is a lie.”

As noted above, the term Mary uses for her grandfather is high-functioning sociopath, but she’s not tossing it around the way a lay person would. She backs it up, again and again. It’s also worth noting that it is no surprise Donald Trump still admires his father and wouldn’t view him in psychological terms. He doesn’t know any better. A person born into a dysfunctional situation isn’t necessarily going to recognize its dysfunction; that’s his norm and unless and until he explores it with a professional, it always will be.

“Symptoms of sociopathy include a lack of empathy, a facility for lying, an indifference to right and wrong, abusive behavior, and a lack of interest in the rights of others,” Mary writes. “Having a sociopath as a parent, especially if there is no one else around to mitigate the effects, all but guarantees severe disruption in how children understand themselves, regulate their emotions, and engage with the world.”

Aside from reveling in the writing and getting to take a deep dive into the psychology, what I got from reading the book was, well, it made me more resigned to where we are as a country. Not complacent or removed, mind you, but lately seeing the news in a different way. Of course the President is escalating tensions in our cities. Of course he is.

“An effective response [to the civil unrest since George Floyd’s death] would have entailed a call for unity, but Donald requires division,” Mary Trump writes. “It is the only way he knows how to survive — my grandfather ensured that decades ago when he turned his children against each other.”

Of course the President sees bringing back press conferences on the pandemic as potential ratings grabbers instead of a forum to inform the public of updates on an ongoing health crisis.

“His administration and his party have become subsumed by his politics of grievance and entitlement,” Mary writes. “Worse, Donald, who understands nothing about history, constitutional principles, geopolitics, diplomacy (or anything else, really) and was never pressed to demonstrate such knowledge, has evaluated all of this country’s alliances, and all of our social programs, solely through the prism of money, just as his father taught him to do.”

Of course a lot of the President’s supporters think of him as a successful businessman and no amount of evidence will shake them of that perception.

“After a decade during which Donald floundered, dragged down by bankruptcies and reduced to fronting for a series of failed products from steaks to vodka, the television producer Mark Burnett gave him yet another chance,” Mary writes. “The Apprentice traded on Donald’s image as the brash, self-made dealmaker, a myth that had been the creation of my grandfather five decades earlier and that astonishingly, considering the vast trove of evidence disproving it, had survived into the new millennium almost entirely unaltered. By the time Donald announced his run for the Republican Party nomination in 2015, a significant percentage of the American population had been primed to believe that myth.”

I could do this all day, relay astounding passages from Mary Trump’s book and relate them to the countless examples of lies and corruption we’ve witnessed the last four years or so. I can’t help myself with bracing gems like this:

“If he is afforded a second term, it would be the end of American democracy.”

We can already see that, can’t we? Mary simply affirms what we’ve already been losing sleep over.

“His ability to control unfavorable situations by lying, spinning, and obfuscating has diminished to the point of impotence in the midst of the tragedies we are currently facing,” Mary writes. “His egregious and arguably intentional mishandling of the current catastrophe has led to a level of pushback and scrutiny that he’s never experienced before, increasing his belligerence and need for petty revenge as he withholds vital funding, personal protective equipment, and ventilators that your tax dollars have paid for from states whose governors don’t kiss his ass sufficiently.”

Again and again she ties it back to Fred’s dark legacy, one that seemingly can’t stop twisting her in knots. We learn along the way that the closest her father Freddy, a pilot, came to soaring happiness was when he was flying, but her grandfather diminished that ambition at every turn.

“Donald, following the lead of my grandfather and with the complicity, silence, and inaction of his siblings, destroyed my father,” Mary writes. “I can’t let him destroy my country.”