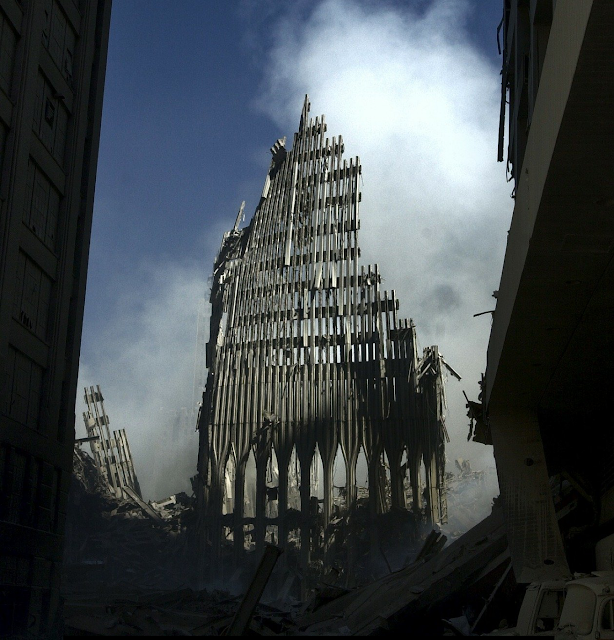 I am sitting on a bench at Pier C in Hoboken, N.J., gazing at the Freedom Tower across the Hudson River, reflecting a bit during that fraught time when the planes hit the World Trade Center 19 years ago.

There, masked, I think of an impeached President running amok. We’re in grave danger.

We have not honored the dead.

What we’ve done is give in to our worst impulses, to let ourselves be divided by a madman. I don’t use that term easily. Look it up. It fits.

Last night I watched a clip of the President of the United States in Michigan, swaying his body to and fro, getting that smug look he gets when he’s about to unleash lies that he knows his audience will relish and lap up like starving cats who’ve just been given a bowl of fresh milk.

The exhilaration he gets from power isn’t so much from the office itself, but the knowledge that he has commanded the rapt attention of people who are some combination of these: lost, excluded, misguided religious zealots, blatantly hateful of people of color, just fine with people of color unless you claim systemic racism exists, ignorant, uneducated, sexist, spellbound.

On this 19th anniversary of 9/11, we are watching our fellow citizens ignore what they clearly know is wrong. Excuse things away they have to know are unethical, or perhaps, aren’t smart enough to understand.

They think this is about politics. It hasn’t been since 2015 when this grifter who’s been playing a successful businessman in the TV show that is his life came down an escalator. We’ve all been represented by people we wholeheartedly disagree with. Most of us have never been represented on the world stage by a person so devoid of a moral center, one who has no qualms about desecrating norms, the White House, our soldiers.

He is making us question the greatness of our country in an ironic twist to the words on his red hats. Hats that make us cringe when we see one coming at us.

He pretends to care about life when we all know a true pro-life person would be devastated instead of unfazed by over 190,000 deaths on his watch. But valuing life outside of the uterus doesn’t score points with the Christian crowd he pretends to be a part of so he can corral votes.

As I watched him do his toddler-esque performance in Michigan, tell gullible people that Democrats are violent and destructive and coming for their suburbs, purse his lying lips to keep the steady flow of spew coming in a way he knows will bring him applause from his unmasked masses and so many watching at home with glee, I thought about the towers crumbling to ash and the promise I made to myself to continually honor those who lost their lives that day.

I made myself into a better person in the ensuing years, only to sit here 19 years later in a mask, wondering how this could have happened. There was more unrest rumbling beneath the surface of our citizenry than I could have ever imagined. In the beginning, I tried to understand it. If the afflicted weren’t taking us down such a dangerous path, I might pause and try to understand more. But it’s too late for that. We have seen where they are willing to take us, seemingly unaware of the consequences but more likely happy with the result.

Free press. Who needs it? Checks and balances. Why? Reputable standing in the world. Who cares what other countries think of us?

We have a Presidential Medal of Freedom recipient who has called a vice presidential nominee a “ho.” A President who turned our cherished White House into a cheap, gaudy campaign spectacle against all ethical codes.

They cheer. They keep listening. They get worked up. His power is their power. They are finally being represented. They are holding their country hostage and it’s heady. Big boats sink little boats in grand metaphor. Massive wildfires on our West Coast get scant mention because they vote blue. Not even the long, storied tradition of our postal service has remained untainted.

And a pandemic that has killed more of us than the terrorists did on 9/11 continues to ravage us, unchecked by a weaving and dodging President.

We can choose to see #NeverForget in a whole new light. As in, never forget what it feels like to be ruled by a man who admires the evilest men in the world. Or who has done any of the things I’ve already mentioned. Because that’s where we are.