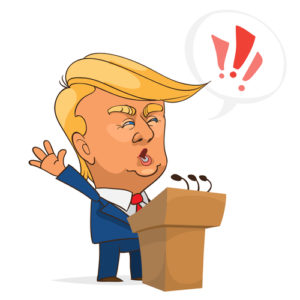 It’s a slow day at the office. I watch the 23-year-old Italian intern out of the corner of my eye, trying like mad to focus on my computer screen. He is a hottie. But he is almost 20 years my junior. Does that really matter? I could sex him up in a New York minute.

This is an excerpt from my memoir, Alive in the Sunshine. It’s a detailed fantasy that I didn’t act on. They’re lust-filled thoughts that came rushing in during the course of a workday. It’s part of human nature, this sexual component, and it often seeps into the workplace and beyond despite our best efforts. Most of us are aware of the boundaries we must draw and the respect our co-workers deserve.

The incident described here happened in 2005, right around the same time Donald Trump was on a bus telling Billy Bush how his celebrity status allows him to grab a woman by the pussy when the mood strikes. “And when you’re a star they let you do it, you can do anything,” the current Republican candidate for President said.

While we’ve certainly seen our share of sexism and misogyny over the course of this presidential campaign, I fear we as women start to sound scold-y and asexual even when presenting clear evidence. You know, the feminist stereotype of the uptight, moralizing woman who has no sense of humor and certainly doesn’t crave an earth-shattering orgasm every now and again. She has no time for that; she’s too busy preaching and being angry.

Enough of that mythical figure.

We’re for real. We’re healthy, smart, funny and sexual. We think, we feel, we vote.

Since this news of the Trump-Bush dialogue hit, we are watching the Trump apologists take over our social media feeds with their “guys will be guys” comments. They seem incapable of discerning the difference between a guy saying, “I want to hit that” and “I am going to kiss her and grab her by the crotch whether she likes it or not.” Trump has gone from annoying frat boy to entitled abuser here. How do so many not see that?

There are many women chiming in to support Trump as well. They claim they’ve been in groups with other women and have said worse things about men. Funny thing is, I’ve been in some pretty racy conversations with other women, but not once did I hear one say, “Have you seen Joe in accounting? Yum! I can’t wait to grab his dick on my way to the coffee room.”

I know Trump supporters. I’m surrounded by them, even related to them. The men I know who support Trump would jack him up against a wall if he ever touched a woman they love the way he describes in that tape. Therein lies the rub, the hypocrisy in this. They want their country “back” so badly they’re willing to overlook a blatant wrong they’d never put up with from another human being in their lives. Besides, he said those words oh so long ago. You know, when he was in his young and innocent 50s.

This guy? He’s a savior. This latest stuff is all part of the swagger they love. Hahaha. It’s just one more thing he can get away with that they can’t. He’s been divinely sent to make America great again. So what if his womanizing crosses into the danger zone. We’re not voting on his love life. We want his business acumen in the White House, his vision of the United States we grew up in, the one where it was okay to relegate women to whatever status we wanted. That was power.

Nothing seems to bring him down. That’s still a fantasy waiting to happen.