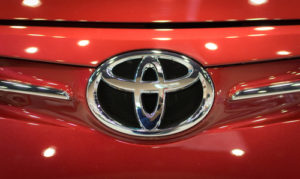 I have never in my life thrown up a Hail Mary like the one I’m about to heave your way. It literally reads on my to-do list: Hail Mary to Toyota. Since you are the CEO of Toyota North America, here goes.

Your Corolla commercial with the song “You Don’t Own Me” by Lesley Gore is haunting me. Every time I see it I am reminded of the dream that’s been forming in my mind for the last few years. It goes something like this – I drive across the United States and get paid for blogging about it. A company that “gets it” signs on as a sponsor and we team up for a project that inspires potential customers to get out there and explore what’s meaningful in their own lives and motivates people of different generations to talk to each other. I think as a company that sponsors “The Voice” you’re already on board with the idea of going for one’s dreams.

I live in Hoboken, N.J., and haven’t owned a car since 1999, but when I did it was a red Toyota Corolla. I am an independent contractor who makes her living as a writer and life coach. I can work from anywhere. I began my journalism career as a sports writer and that allowed me to learn the craft of bringing people along on my journeys. Recounting a college basketball game so people feel like they’re there is a thrilling challenge I rose to night after night back in the 90s. As a baby boomer, I came into my own by getting young people to open up to me. That is still true today.

Since then I’ve worked as a web producer for major networks and even a television producer for a short period. After 9/11 and a subsequent layoff, I was jolted and began learning how to appreciate life more. I became certified as a coach so I could help people. The ensuing 10 years of challenge and growth became my first book, a recently published memoir called “Alive in the Sunshine.”

After enduring a contentious presidential election in our nation this year, it may be time for many of us to go inward and find the meaning in the every day. It’s our interactions, our way of being in the world, that can collectively cause shifts that matter and impact our fellow humans. I want to ask millennials about their lives and what role ‘purpose’ plays for them. What are they doing that’s amazing? What are their stories? How does their world view differ from mine?

I have been eschewing the 9-to-5 for years now. “You Don’t Own Me” is like my anthem. I work hard, don’t get me wrong. But I do it in a way that works for me. That philosophy is growing because of the young generation. While your commercial is aimed at millennials, you used a song from the decade I was born in. It appealed to me because it’s a natural bridge, then to now.

Here’s what I have in mind. Let’s call it the “You Don’t Own Me” Tour and Blog. My pitch:

This year in music we’ve lost David Bowie, Glenn Frey, and Prince, among others. It’s been sobering. Artists who represent the soundtrack of my life are dying. I am feeling my mortality and want to tap in to a wellspring of youth.

In the midst of it all, a lucrative job opportunity comes along. It requires being available seven days a week and has quotas that will have me cranking out lengthy stories at a crazy clip. The job will own me. These thoughts duel in my mind for a few days: Life is short. Money! Life is short. Money! I fret and ponder.

Then I sit down and write an email turning down the job. In it I tell my potential boss this: “As a freelancer, there is much appeal in a steady paycheck, but in this case I don’t believe it will allow me enough time to LIVE.”

When I see the 2017 Toyota Corolla commercial and hear this song, I am instantly at attention. Yes. Wind in my hair. Driving. Singing loudly. Living large.

Am I living now? Really living? My truthful answer at age 54 — sometimes.

It feels unsettling. And I know why.

I haven’t yet had cheese in Wisconsin or lobster in Maine. I haven’t flirted with a cowboy. How is it that I haven’t been to the Rock and Roll Hall of Fame? I’ve never seen our Presidents sculpted into granite in South Dakota. The covered bridges in Madison County beckon. So does Walden Pond. Timeout says there are 26 spectacular art museums in the United States and I’ve only been to 11 of them. There are old churches and tiny churches to sit in and reflect, quaint bookstores to browse, antique shops to stroll. I haven’t bellied up to the counter at a greasy spoon in Mississippi and shot the breeze with a local over a cup of coffee, or had a glass of Riesling at a Washington vineyard.

It’s time for storied sights and conversations with young Americans, Toyota Corolla as my trusted companion. There is some planning, but also space built in for spontaneity. Farmers markets, fields of flowers, pancake houses, irresistible open road, tea in a pretty floral cup … they’re all bonuses. Sometimes I go urban, sometimes off the beaten path. Getting lost, getting found. Staying open to where it all leads.

Along the way I blog, Instagram, Facebook, Tweet to bring readers along on my ride. It lets them live vicariously through an unfettered single woman who has a fire in her belly for exploration. And living. And most importantly, learning.

There you have it. I would be delighted if you’d reach out and discuss the possibilities with me. I have written blog posts for two other brands – Airstream and Mutual of Omaha – and enjoyed the work immensely. You can also see the other reputable publications I’ve written for on my website – www.nancola.com.

Thank you, Mr. Lentz, for your time and consideration. Let’s go places.