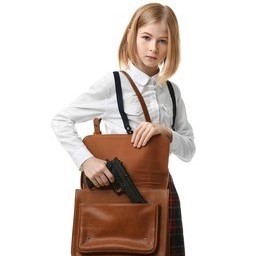 Remember in 2009 when the conservative media went nuts because second graders in a New Jersey school sang a song celebrating President Obama’s achievement as an African-American? Recall their claim that schools were trying to indoctrinate their kids to a political viewpoint?

This is when I knew the level of partisanship in this country had crossed over into Crazy Town, a completely new plane of irrational.

Those kids would be about 16 now. So it’s feasible that some of them walked out of a high school on March 14, 2018 for 17 minutes in solidarity with their fellow students in Parkland, Fla. who lost 17 classmates to gun violence on Valentine’s Day just a month before. From coast to coast there were children standing up for their own safety, some carrying posters, some stepping up to microphones.

[Flashback time. I wish I had this kind of conviction and passion in me when I was a teen. I was smart, but too busy being awkward, wanting desperately to be liked, thinking I was fat (I wasn’t), and trying to figure out how to attract the “right” attention when my breasts were developed and therefore seemingly OK to leer at and comment on. I simultaneously detested and craved all of that. If only I had had a cause, something outside of myself I could feel passionate about …]

This week, while so many of us celebrated the kids’ willingness to declare that they deserved to go to school without fear and that the adults in charge were losing ground on keeping them safe, we also had the backlash. Some of it came in the form of the #walkupnotout idea that encouraged kids to walk up to other kids who were being bullied or outcast. Why the assumption that these be mutually exclusive?

Teach your children to be kind to others every day and be part of creating an enormous shift in the dynamics of how young people interact. Also teach them to either walk out if they want to or simply respect the viewpoint of others who do. Why does it have to be a politically charged debate? “I want to learn while not being shot” is not on its face a partisan stance.

Kids seeing this reaction from adults will only serve to fuel their resolve. It’s the exact nonsensical partisanship that got us here in the first place.

And then we have the “rules” and “discipline” set. Can I get an eye roll here? Are you really clutching your pearls over an organized 17-minute walkout designed to cast attention on a pressing problem with the accessibility of weapons in our country? Organized, by the way, by students who haven’t even had the time to mourn their friends because they decided to funnel their anger into action?

This notion that all these kids should follow “rules” also smacks of hypocrisy when many of the same voices say they don’t want stricter gun laws because, hey, what’s the point of having rules when people will break them? So now they’re for rules? How convenient.

What are we teaching these kids? Our generation has caved to – created? — this way of doing things. We have, by our votes, allowed special interests to infuse our government and the kids are paying the price. And guess what? They know it. They’re not stupid.

I opted out of parenthood. A really good decision for me. This means I get to watch from (mostly) afar as my friends and family and complete strangers take a stab at procreation and all that comes with it.

I love that kids have taken up the gun fight. If I was a parent of a kid who walked out, especially one who was the only one who walked out in her school, I’d be so, so proud. And I’d tell her that the best people know when to flout the rules in advancing the greater good. And that not everyone will agree with her and some will even be unkind about it, but that ultimately she will find her place in the world by following her conscience and her soul.

Maybe someday she’ll decide to learn how to use a firearm and become an advocate for their safe use and proper vetting. Could be this walkout experience will teach her that.

Oh no. Too rational?